The United Nations Special Rapporteur on Minority Issues, the Tom Lantos Institute and the Diplomatic Academy in Vienna organised the European-Central Asia Regional Forum on 2 and 3 May 2022, which brought together a large number of Minority Rights experts that discussed the situation of minorities in Europe and Central Asia. Mr. Zandberg participated in this conference as well and made several statements during these two days in Vienna.

The objective of the event is formulated by the organisers as follows: “At a time when minorities face increased challenges worldwide, the Europe-Central Asia Regional Forum will mark the 30th Anniversary of the UN Declaration on the Rights of Persons Belonging to National or Ethnic, Religious and Linguistic Minorities by undertaking a critical assessment of its problem-solving capacity through a gap analysis focusing on the normative framework, institutions and mechanisms facilitating implementation, and the effectiveness of minority participation in norm-making and norm-adherence.  The aim is to formulate concrete recommendations for the improvement of the regional and global minority protection regimes.”

The event was organised in four thematic sessions where experts provided input for further discussion and made recommendations on improving the Minority Rights situation. The sessions were the following:

The two-day event was held at the premises of the Diplomatic Academy in Vienna and was the first physical event of the Regional Forum since the Covid pandemic started in March 2020. Most of the leading experts on European Minority Issues took the opportunity to travel to Vienna and enter into a debate on the current state of minority rights and how minority participation can be enhanced.

In the evening of 2 May 2022, the Austrian Federal Ministry for European and International Affairs organised a reception at the ministry where Ambassador Tichy welcomed his guests and shared the views of the Austrian government on international cooperation within the institutional frameworks that promote and support the minority rights as laid out in the European covenants and the United Nations’ declarations. 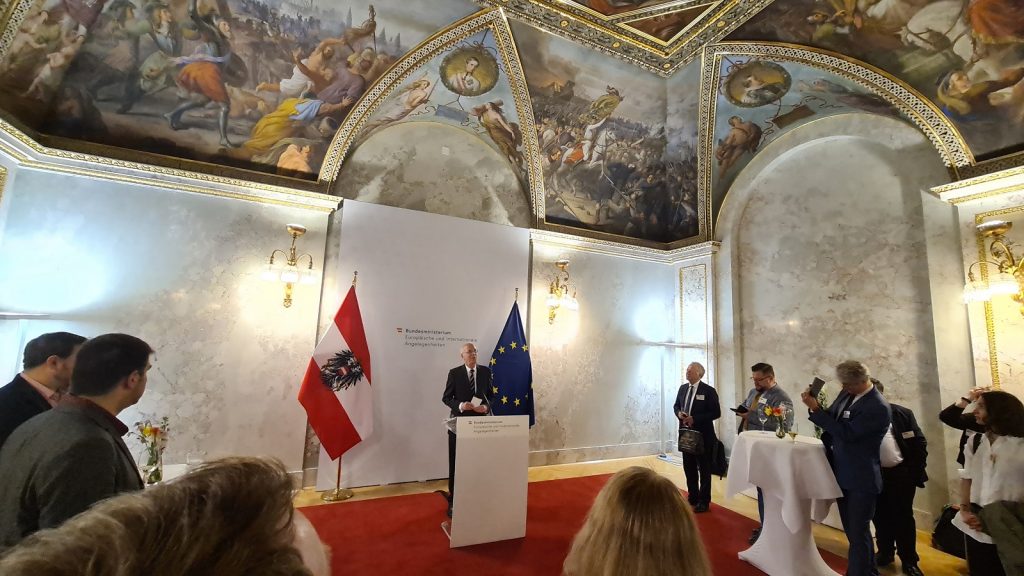